Identifiers: Am I Broken?

Kester: There are a multitude of identifiers.  Often children grow up confused in the world.  Most children think that they’re broken.  They are a broken hearing person.  But no, they’re Deaf or Hard of Hearing.  But they don’t have those identifiers until much later in life when they get into high school or even become adults and join the community.  Then they learn a little bit more and realize they’re Deaf.  They’re not a broken hearing person.  We should explain clearly to them that they are Deaf or Hard of Hearing at a young age.  They’re bilingual.  They’re not broken.  Often children take on that identifier of being broken because of what doctors, parents, or teachers tell them.  There’s a negative view on it.  But no, they’re bilingual.  They’re Deaf.  They have a lot of capability because they have access to two different worlds.  Children do not have to identify this way.  They can develop that currently.  And it can affect their social and emotional well-being.

How important is age for language development?

Petra: As children are learning language there is the window of time from 0-5 when the brain is a sponge.

Petra: They absorb so much information, and their language development excels.  But once they become age 5 and beyond their brain becomes more hardened.  It’s older.  It’s harder to learn more after the age of 5 up until 13.  Yes, well, and you already have language.  You already have language so it’s different because you have English and you had it at a young age.  For Deaf children it’s important to remember when they’re first born, when they’re infants, they need to learn.  They can still learn later in life, but the earlier the better because of language acquisition during that window of time and the amount of development that can happen.  So it is important to start in infancy.

And the two of us have seen that with our students.  When they come in at the age of 5 without any language versus if they come in around 7 at no language, it’s much better off if you come in at 5 and we can start teaching language at that time.  So the earlier you can catch the child the better.  If they reach the age of 7 they miss out on a lot because their visual language processing center has already been developed up until those early years.  And so when they miss out on those critical experiences, research shows that it’s so important to give it to them early.  Even in utero it’s shown that if you talk to the baby, they can hear you.  But what about if they’re a deaf child?  They can feel the movement of the sign language.  So even if a parent doesn’t know whether their child is hearing or deaf, they can still speak with them and touch their stomach.  They have so many nerves in their brain that are firing, and they’re developing the wiring.  So that then when they’re born they can continue that development through speech and sign language.

Kester: When a child is born their brain is developing synapses.  And they’re making a neural network within their brain.  Research shows that 1,000 connections per second are made in the first year.  But then after that, development slows down.  So age 0-1 is the most critical, such an important time.  So speak and sign during that time as much as you can in that first year.  So 0-5 is the critical time when you should be using sign language and allow the child to start babbling.  And as you’re talking to them and signing to them, slow down your conversation.  Often children will miss some of the language, but when they make the eye contact and make a connection to a vocabulary word like ‘melon,’ they’ll see your face and your sign as well as the actual fruit and make that neuron connection within their brain.  So it’s so important for that language development.  Often doctors will have the child come back for an eye test or a hearing test 3 months later after they’re born.  But before those 3 months, they have no language access.  And it can impact their entire life.  They have no idea how negative that can be if the child does not have any neural connections to language before the age of 3 months. 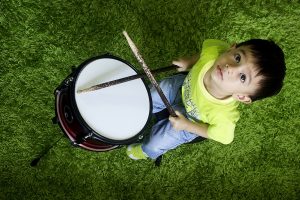 Petra: We try to give our students language that they’ve missed, so we use language play and language rhythm.  We also use music, visual music, plus education, plus language, and other communication tools so that it’s all provided together.  If they’ve missed something then hopefully during that critical time we can give it to them.

Language Development in Deaf Children: What You Should Know