Petra: I like Rachel Benedict.  She created a video that’s really excellent about how to reframe.  So she keeps a positive approach when somebody finds out that they are deaf or their child is deaf then they provide options.  It’s an opportunity to give them resources.

Kester: Yes, it’s an opportunity, and instead of focusing on their hearing test failing and thinking that they’re going to function at a lower level, instead providing them a referral to somebody who already knows about the history and Deaf culture and sign language.  So that then they can have both aspects of English and Sign Language.  It gives them options, two different paths, so that these children can fully benefit instead of just using one language and ignoring the other or even providing access to it later, but not immediately.  And this is where language deprivation begins.  But it’s a child’s right.  Parents just follow the doctor and accept whatever resources they’re originally provided.  But that’s where language deprivation begins.

Petra: So really parents are misguided.  They mean well but they’re misguided because of the system.

Bilingual: the more language the better 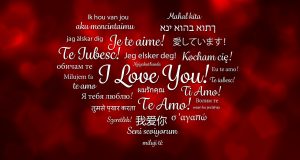 Kester: Yes, so the question is it necessary to know other languages?  And research proves that having multiple languages is better for children.  Two or more languages are better.  In Europe for example many people speak or sign a variety of languages whereas here in America we just think English is the best.  And that’s the only necessary language to learn.  So parents feel that when they find out their child is deaf they need to learn their language: English.  They need to meet the parents’ expectations.  But that’s not fair to them.  We all have eyes, we all have hands, which means we should all accept sign language and be able to learn it so that then they can be fully accessible.  Yes, they can learn how to speak, but give them the opportunity of sign language and be able to see and interact with the Deaf Community.  So that then they can interact both with hearing and Deaf and have a variety of opportunities and people they can interact with.

Petra: So many Deaf and hard of hearing people learn how to speak and maybe go to a public school.  But they still can miss so much information.  Maybe one on one or in a small group they’re fine if they’re familiar with the topic they can understand.  But in school if there’s a new topic or new information or content in a loud classroom, it’s the exact same.  Deaf children will miss information while hearing children will understand it.  So if they can learn speech that’s great but learn it along with sign language to have 100% access.

Petra: There was a Facebook post recently I saw that said: “Bilingualism is the new literacy of the 21st century.”  That’s a really powerful statement.  Here in America there’s a strong emphasis on only learning 1 language.  But learning more is better.

Kester: So there’s the perspective on bilingualism.  If somebody knows two or three languages then they’re looked down on.  But over and over again it’s been proven that the more languages you know the more intelligent you are and the more opportunities you will have.