Petra: My name is Petra.

Kester: And I’m Kester.  It’s nice to meet you.

Is Language Access in America an issue for Deaf children?

Yes, okay, sure we have all the numbers and statistics here, but really what they show is that there is an epidemic in America.  We know that many Deaf children grow up with hearing parents, 95%; which is fine, and most of the time the hearing parents are not the issue.  It’s how the audiologists and hospitals portray information to the parents.  The parents want to do whatever is best for their deaf baby, so they follow what the professionals tell them.  So they hear that speech is important, and they get a hearing aid or a cochlear implant and speech therapy.  So they follow all of this advice but often the doctors, the hospitals, and the audiologists do not include the Deaf Community or Deaf professionals.  And those Deaf professionals would be able to provide information regarding deafness in particular, and they would focus on the bilingualism: speech as well as sign language, so that as the child grows up they have a strong understanding of language and can have the motivation from understanding.

We know that they want to learn and so if they’re provided both sign language and speech they’re given 100% accessibility.  Sure they will have language receptively and expressively through sign language, and often people discuss, well, hearing parents don’t know sign language and so will they be a good model for their Deaf children?  Will they be able to keep up?  But really, I tell you, it doesn’t matter.  I’ve seen many people use the Deaf Mentor Program which provides services for hearing parents to learn sign language.  Which is wonderful, and they can work then one-on-one with their child at home to make sure that the home is fully accessible for them.  And they’ll provide interaction information about that so that the child is better off than the other way of the child not receiving any sign language in the home, and they would struggle in that way.  So yes, it is an epidemic in America.

In California, are you aware of Lead-K?  You’re familiar with Lead-K?  Well many states throughout the US, I think the most recent one was the seventh state, Louisiana.  They recently passed Lead-K.  And we here in Missouri were the second state to pass the law that required a language analysis in both sign language and spoken English.  So it was a test, and they also did written, which was later.  And this analysis was for infants ages three, four, five.  And they noticed that there was not a lot of language development happening during this time.  And so early intervention needed to be enacted.  If parents decided that they wanted spoken language tested only then they could see an example of them being tested ages zero through six.  But sign language was also added which was nice.  And California recently proposed a report be done so all of California state was shocked to see that seven percent of deaf babies and children experience language deprivation.  And so we here in Missouri kind of brought along the same thing.  I think in a year or two we’ll be coming out with that report.  Yeah, I believe the summer of next year.  So it will test the progress of children and the analysis will show language deprivation and how common it is.

Why does Language Deprivation occur?

Hospitals typically focus on fixing a problem they look at it as a health issue.  Deafness is something that needs to be fixed because there’s something that’s broken.  But that’s just the medical perspective.  It’s not from the educational perspective; thinking about interpreters, teachers, deaf education that’s available.  They don’t focus on the education aspect.  It’s a completely different type of perspective.  It’s a problem needs to be fixed which is difficult.  They can include education along with their medical perspectives.  They could bring in culture, but there’s so much debate over it.  There are so many doctors.  But really it’s difficult because this is the way it’s been for so long.  But there are so many wonderful things about deafness: culture and language and so many other benefits.  But doctors don’t have time for that.  So when they see it as a problem, then it needs to have a solution.  It needs to be fixed. 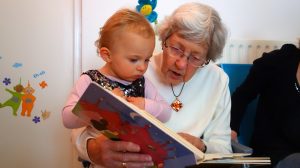 So a parent’s first experience often is with the doctor.  They have a deaf baby and instead of being approached by the Deaf Community or an institution, they go into the hospital.  And the first person they see is the doctor.  And they’re trying to find a solution.  So often parents, when they give birth to a deaf child, it’s the first deaf person that they’ve ever met.  And so they’re struck with grief or shock.  They’re overwhelmed and unsure of what to do.

So it’s really all about how they approach the information.  For example, the two of us have experience with this. When my daughter was born I didn’t know whether she was deaf or hearing. It was two or three days later that my doctor came in and said that she had failed her hearing test. They said perhaps it was a mistake. Maybe she had fluid in her ears. But they used the word failed which was very negative, and it just didn’t sit right with me. It didn’t matter to me whether my child was deaf or hearing. I was excited for her birth. So I still went ahead and set up an appointment and I brought her in for a test about two months later where they hooked up wires, and they could do a more precise test for her hearing at that time. And they did determine that she was fully deaf, and again the doctor said she failed her exam.

Kester: Yes, they were very apologetic.

Petra: So instead, they could have just said she’s deaf or hard-of-hearing, something more neutral using neutral terminology as opposed to saying she failed or she passed. And I just didn’t feel like this was the right term to use. I believe that it wasn’t appropriate. I was still happy for her no matter what So our perspectives were just different. And they asked if we wanted early intervention services. But I told him we didn’t because already she was going to be in the Deaf Mentor Program. We were involved in all of that, and she would have plenty of access.