It is a common misconception that American Sign Language (ASL) is English expressed visually and not its own language.  As we celebrate in Deaf History Month, sign language, in one form or another, has been around for centuries.  Through the introduction and exposure to new people and new ideas in this country, ASL has developed into the language that it is today.  ASL, like all languages, borrows, alters, and invents signs to stay relevant to the times and society.  So let us value it as such.

ASL is Equal to English 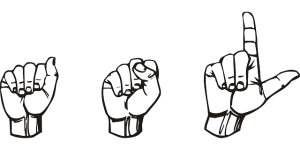 Sign language used to be considered an “inferior” derivation of English.  “However, linguistic research beginning in the 1960s has shown that ASL is a true, complete and rich language in its own right, unrelated to English…  ASL is a major part of American Deaf culture, and is transmitted from one generation of signers to the next.” (Harrington, 2015, updated)  Throughout Deaf History Month, consider the grammar of ASL as well as the varieties of sign language internationally.

Deaf History Month also celebrates American Deaf Culture.  “Deafness creates its own cultural tradition. To those who can hear, living Deaf is foreign and vice versa.  Like Navajo, ASL is foreign without being geographically separate.” (Smooke 2012)  Perhaps the most important aspect of Deaf Culture is the language. Due to its differences in language, the Deaf Community has developed a set of etiquette rules for dealing with each other and hearing individuals as well.  For example, there are rules for interrupting or leaving a conversation that often seem blunt to hearing individuals. (Frasu)

During Deaf History Month, take some time to learn something new about American Sign Language, Deaf Culture, or any one of the great Deaf pioneers in history and celebrate the fact that we have had the privilege to have benefited from their struggles and ingenuity.  Check out additional resources for further reading.

“The Legitimacy of American Sign Language” by David Smooke, 2012

“Learning About Deaf Culture and Community” by Amy Frasu

“Robert Panara, writer, poet professor, and pioneer of deaf studies, dies at 94” by The Washington Post