Power Positions with Diversity: What Does Different Really Mean?

Nov 5, 2018 | Customers, Interacting with D/deaf or Hard of Hearing, Types of Communication Access, Working with Interpreters

Power Positions with Diversity: What Does Different Really Mean?

Diversity is a huge buzz word in the world today with an emphasis on minorities, disabilities, and gender equality.  Power Positions with diversity manifest themselves in every type of environment, and often times the person of authority doesn’t even realize they have a power position.

What is a Power Position?

Similar to Sign Language Interpreters and Power Positions, people with authority over another person have the power of outcome.  Here is the definition we shared in the previous blog:

“The term “power positions” is used to explain who has more power in a specific setting.  Some of these positions are obvious, such as a supervisor over an employee, a judge over an attorney, or an attorney over their client.  This power position may also appear when someone who is financially wealthy interacts with someone who is financially poor.  The general public is often under the impression the wealthier person has more power because they have more resources. This merely affects which individual demonstrates more power or authority in a given situation.”

Do You Have a Power Positions with Diversity?

The question to begin with is how can you tell if someone is “different” in the first place?

Diversity is so much more expansive than minorities, disabilities, and genders.  It can also include personality types, religion, age, social status, and intellectual capability.

Example: A young introvert comes in to a hospital as a patient.  He is there for a follow up appointment with a specialist, but he is not comfortable asking the front desk about his insurance coverage.  The receptionist assumes he knows since he is a man, and men are never hesitant to ask questions about money!  Because of this assumption, the patient ends up leaving the appointment feeling concerned whether he’ll receive a bill in a couple weeks.

What the receptionist should have done is instead of assuming the patient’s forthrightness, she should have recognized her position of power and knowledge and put herself in his shoes.  She could have asked him if he had questions or concerns.

So the simplest answer to the above question is, you do not need to KNOW if a person is “different” to still treat them with fairness.  Each person has their own position of diversity.  With all the personality tests out there, recognize what your personality and tendencies are so that you know how you could react to others of a different perspective.

How Do I Treat Those Who are Different? 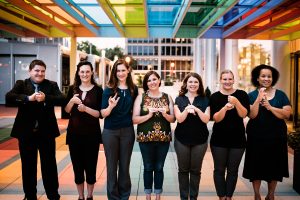 Second, how should you, as a person who is in a power position with diversity, treat those who are different than you?

Experiences and upbringing also affect reactions to environments.  You may be very comfortable in your workplace while a new employee does not simply because they have not been there as long.  Their only difference in this case is length of time on the job.  You have a position of power because you know the ropes.  Instead of asserting your “I know more than you” position, share your knowledge with them to help them feel more comfortable.

So Analyze Where You Have a Power Positions in Diversity

How can you give up your authority today to give someone else the power over their own life?

Be aware of how you’re using your position of power in your workplace or out in the community to diminish the power of another.  Whether they are Deaf, blind, Christian, Buddhist, Black, Filipino, grew up with parents or without, bi-sexual or heterosexual, we can still treat each person with dignity and equal access to services.

How to Demonstrate Respect in the Workplace

What are the Important Dimensions of Workplace Diversity?