Did you hear about the recent announcement about Sign Language Day?  Yeah! Recently the United Nations declared an official day of sign language, a sign language day.  I thought, wow, that’s really cool!

If you think about it, since the Milan Conference in the 1800’s, the Deaf Community has been fighting for our rights.  We really wanted to be heard, and so laws have been written like the ADA that have been passed.  The UN now has officially declared a day recognizing sign language.  The World Federation for the Deaf assisted in establishing the official day.  And now here we are.

Previously we had to fight to be recognized.  For example in schools with Deaf children, especially in mainstream schools, we didn’t receive all the appropriate access that we needed such as interpreters, closed captioning on TV.  We didn’t have any of these things, and it was frustrating because we were behind in education, what was going on in the classroom, and just missing out on things.  I grew up attending a mainstream school, and I had no idea about Deaf people.  I didn’t even see myself, view myself as a Deaf person.

I remember, I think I was in high school at the time — My school began giving announcements, TV announcements like sharing the news in first hour.  And it would tell us what was going on.  The first day I was sitting there, and I didn’t understand anything about what was being said.  My teacher realized I didn’t understand.  And somehow she got in touch with someone, perhaps the school board, and asked if they could have a caption box with the TV so I could understand what was going on as well.  So they added a caption box.  I remember sitting in the classroom watching in the captioning and finally being able to understand.

That year it was the 90’s.  There was a big war going on — the Gulf War at that time.  It was really serious.  Of course I did not have an interpreter so I was really behind and had to lip-read everything.

Once I graduated I went to Community College in the Deaf program there.  I did have interpreters which was a culture shock.  I had the full access to language and what was going on in the classroom.  I could understand what the teacher was saying — which was a big change.

When I was a kid growing up my grades were generally C’s, or an average of C or B.  But when I got into college, I had straight A’s because of the difference it made having an interpreter and a note-taker as well.  It was a slow process during this time when the ADA law was becoming truly effective — The process wasn’t perfect.  But it was much better than nothing.

When I went to Gallaudet University, that was a big change as well.  It was a different world because 24/7 we used sign language.  In the college classroom previously I had to use an interpreter because there were hearing teachers.  But at Gallaudet everyone signed.  In the classroom even the teacher signed.  There was no going back and forth from the interpreter to the teacher to me and vice versa.  I was able to directly communicate with teachers.  We’d go to the post office or the cafeteria or the library or anywhere else on campus and be able to sign.  We didn’t have to depend on writing on a piece of paper to communicate.  Everyone used sign language which was perfect.

Also during my Gallaudet years, it was really touching because there would be a lot of Deaf people there who would use sign language from all parts of the world, and they would all come together at the campus.  And it was cool to see different types of people and be able to meet them and learn about their culture and be able to know their background was similar to ours.  All of us who are Deaf have gone through similar frustrations in the hearing world.  We’re all Deaf and even though we have different backgrounds, the similarity, is that we all use sign language.  And it’s really cool, it’s really great.  It doesn’t matter where you’re from.  We were still able to connect with each other.

Living in a Hearing World 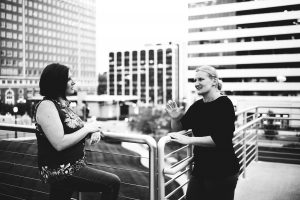 After senior year when I’d graduated I knew I had to go back to the real world.  So I went back all over again to all the frustrations of requesting interpreters, and people deciding not to provide them.  I’d go to work and worry if I would understand what was going on.  I’d worry that people would look at me funny or think I was bothering them.  I’d worry they’d think I was a burden on them.  But I had to let that go.

I’m lucky now I work for MT&A, a sign language agency.  My boss and co-worker both sign which is nice.  I don’t have to worry about requesting an interpreter or other things that go along with being Deaf — things like that.

Another thing I enjoy doing is going to concerts.  I love music.  I’ll request an interpreter, and I’ll sit in front of the interpreter where I can see the band as well.  I depend on the interpreter to know the lyrics and what they’re saying.  This is also an opportunity to show the hearing world or really anyone at the concert that Deaf people can enjoy music as well.  It also spreads awareness about the Deaf Community.

This is similar in all kinds of places.  Even going into a movie theater — going to see a movie.  In the past they would have open captioning which I liked, but a lot of people would complain that it would block their line of sight.  But it’s our right as well to be able to attend and enjoy movies.  But change takes time.  Then theaters begin using reverse captioning where they set up a box on the arm of the chair and hang it over in front of the patron’s face so they can read the captions.  And that was okay, but at the time the holder wasn’t very secure so it would fall over a lot of the time.  That was not enjoyable.  Then they added the glasses which were kind of awkward and clunky.  I’d prefer to go back to open captioning, but such is life.

So when comparing my experiences with now, Deaf people had to fight for our rights before.  We got some access, yes, but it wasn’t perfect.  Maybe someday it will be or perhaps not, but I’ve already accepted that’s just the way that it is.  But hopefully for future generations, for Deaf kids, they will have 100% full access.  And perhaps because of the Sign Language Day, more people are recognizing — more people are aware of what is going on.  And so it’s important for kids to know what’s going on and also be involved in their communities.