There are several grammatical features in sign language not found in spoken languages.  But these subtleties in American Sign Language (ASL) are critical to the tone, emotion, and meaning in a signed communication mode.  This is not a comprehensive list of all the subtleties but rather some of the most common ones you will see in the language. 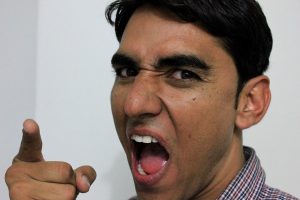 When people sign, you may notice their variety of facial expressions.  The mouth communicates adjectives and adverbs which can change the meaning of individual signs.  These are called non-manual markers (NMS).  Read more in Additional Resources.

The eyebrows play an important role in questions and if/then statements.  For example, when the eyebrows are up while signing a question, it means the question has a yes/no answer.  If the eyebrows are scrunched down, it is a W-H question (who, what, where, when, why, how).

Finger pointing is not as much a subtlety in ASL as an obvious necessity.  Pointing to someone or something in the setting is the quickest, often easiest way to establish a subject or object when signing.  Pointing, also called indexing, takes the place of pronouns in ASL.

There is more to sign language than just the signs.  Shoulder movements and eye gaze are important for an aspect of the language that shows who is speaking.  The space in front of the body is used to set up people, places, and things so they can be referenced throughout a conversation.  Instead of having to restate them, you may just point to or look at their “place in space.”

Shoulders can be shifted to move from the primary/narrator position to a character position.  This is done in a conversational way such as, “They went to the store, and then he told the cashier, (shoulder shift to the right/left) ‘I would also like to buy stamps.’”  English relies on prefacing statements with “he said/she said,” whereas ASL uses the shoulder movements to communicate the same thing.

Eye gaze can also reference established people, places, and things in space in front of you.  The eyes communicate other details such as hierarchy.  Looking up indicates the character speaking is a child or subordinate.  Looking down will communicate the opposite; the character is a parent, adult, or superior.

Space in ASL is a critical parameter of every sign used.  Learn more about space from “Learn and Master Sign Language” with Stacey Webb from the video below.

English is often indirect while ASL is direct.  This is another reason a sign language interpreter may wait several seconds before interpreting something from English into ASL.  In English, we often lead off with qualifiers and/or repeated information before getting to the main point.  In ASL, the main point is often stated first and then explained before it is repeated again.

Additionally, in English we use euphemisms to be more polite.  In ASL, however, there is typically only one sign that directly communicates the meaning of the concept.  For example, in English we may say “pass away.”  In ASL, the sign for “died” is most frequently used.

As with other languages, it takes years to learn all the subtleties in American Sign Language.  It is a living language and is most accurately learned from native users.  You may also reference our articles ASL Grammar and American Sign Language Parts of Speech for more about the linguistics of ASL.