All languages have parts of speech including nouns, verbs, adjectives, verbs, etc.  Yet in American Sign Language parts of speech are produced differently than in spoken English.  From sentential construction down to individual words, the linguistics of ASL is full and detailed produced in a visual, gestural way.

In American Sign Language parts of speech are placed in sentences vertically instead of horizontally.  Often, there is entire sentential meaning in only a couple signs.  In spoken languages, however, a single word unmodified contains single meaning and must be added on to or changed for additional or different meaning.  This is exampled by the tense.  At the beginning of an ASL sentence, time is established as past, present, or future.  Then all the following terms are assumed to retain that tense without modifying them.  In English, on the other hand, each term must be adapted to maintain tense agreement.  For example, “sing” is changed to “sang, singing, or will sing.”  Find more explanation and examples in our article about ASL Grammar.

Because ASL is a visual language, a recommended rule of thumb is to set the scene before showing the action.  This is often why sign language interpreters may wait for several seconds before beginning an interpretation.  Their translation to English may mean they have to wait to see the verb following the ASL subject and object.  Otherwise the literal sentence in ASL would not accurately translate into English.  And at times they may ask for clarification to make an accurate interpretation.

For example, “Running quickly, the boy thought he could win the race.”  In ASL, it must be established first that the boy is at a race.  Then actions would be done as they occur chronologically.  First, he thinks perhaps he can win the race if he runs quickly, and then he actually does it.  So the English sentence would likely be split into 2 or 3 ASL sentences.  Here is a rough example, “Boy races a competition.  He thinks, ‘I run fast, I win!’  Boy runs quickly.” 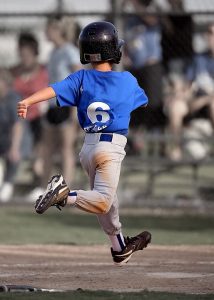 In English, adjectives come before the noun.  In ASL, this would not make any sense.  With that same rule of thumb “set the scene before showing the action,” communicate the subject and object.  Then describe what it looks like.  For example, in English a sentence would read, “The tiny blue house sat on top of a huge mountain.”  ASL would read something like, “Mountain-huge, house-tiny blue, sat on top.”

Adverbs, on the other hand, are often not shown with individual signs.  Instead, a verb is modified to show how something happens.  For example, the sign for “run” would just be sped up if the phrase was, “He ran quickly.”  This is an excellent demonstration of one sign containing several pieces of information.

American Sign Language parts of speech do not include conjunctions, prepositions, or articles in the same way English does.  They are rare and typically unnecessary.  This is either because they are comprised within another part of speech or shown through body language.  Every so often, however, you will see a conjunction such as “but” and “if” or a preposition such as “in/out” and “above/below.”  For more information, read our additional resources.

Why ASL Should Count as a Language Requirement