Differences Between Our Cultures: Terminology and Language

Differences Between Our Cultures: Terminology and Language

We live in each other’s backyards.  We have been neighbors since the birth of our nation.  But not until the last several years with the development of technology and media did the Deaf Community truly become visible to the hearing world.  Even so, there are many differences between our cultures still unknown or misunderstood. 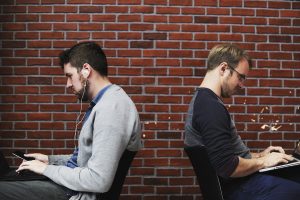 Each individual depending on their background, experiences, region, and age may have a different preferred term to identify themselves.  Most people who are unable to hear do not like the politically correct term “hearing impaired.”  They instead choose to identify as hard-of-hearing or Deaf.  As with other cultures, be sure to ask the preference of the individual before assuming an identifying term to describe them.

According to In These Times magazine, it is politically correct to capitalize the term Black when referring to this community.  “At Colorlines “black” is used with a capital B, while The Associate Press Stylebook advises use of the lower case.” (In These Times)  Similarly, there is a different between the term “deaf” with a lower case d versus “Deaf” with a capital D.  Find more on this in an article about Capital D Deaf.

As with all other spoken languages, there are linguistic variances between English and American Sign Language.  Also, within ASL, there are differences between individual’s language depending on region, education level, cultural background, and upbringing.  If they were brought up learning in an all-hearing family without the use of sign language on a daily basis, when they learn ASL, they may use more of an English word order.  On the other hand, if someone was raised with Deaf parents and/or a Deaf family, they may have used ASL all their life.  Their language may be a very different word order and grammar than English.

English typically has the following word order: Subject, Verb, Object.  ASL has a different word order: Object, Subject, Verb.  English depends on verbal inflection to determine meaning.  Saying a sentence one way may be to show sincerity while saying it another way may portray sarcasm.  Similarly ASL depends on facial expressions and body language to determine meaning.  Very little of a language is about the words.  Much more is about the tone or facial expressions.  As quoted by Terp Topics: “Without grammar, words do not a language make.” (Terp Topics)

There are many other aspects to consider when encountering someone of a different culture.  Identifying terminology and language are only the beginning of differences between our cultures.  Now that you the know these things, consider other aspects such as respectful ways to interact with a Deaf person for the first time.  It can feel awkward to try to talk to someone who uses sign language or whose voice sounds different than yours.  Refer to First Contact with the Deaf Community for more information on how to interact with or talk about someone who is Deaf or hard-of-hearing.